St. George Media is the oldest Greek Orthodox Church in Delaware County Pennsylvania. It traces its history to 1915 when an organization of Greek families recognized the need for a church within their Chester, Pennsylvania, community.  By 1920, however, the project was disbanded due to decreased activity. Hope for a Greek Orthodox church in the area was rekindled in 1926, and, although the project was postponed due to the Great Depression, the Athena Sisterhood, precursor of the Philoptochos Society “Ai Miroforoi,” a Greek School and Sunday School were established. In 1937 an initial fund drive raised $3700 for a church.  By 1942, the funds increased to $16000, and a stone house and carriage house on West Seventh Street between Butler and Kerlin Streets was purchased. May 4th, 1943 was the date of incorporation signed by 15 Charter Members of the parish at the Delaware County Court House. Father Demetrios Ouzounyanis presided as the first parish priest from 1943 until his passing in 1944. Our next priest was Father Michael S. Sophocles who arrived on August 14th 1944, and celebrated the Feast Day of the Dormition of Holy Theotokos.   The new church was built on the adjacent lot 1949-1950 and was named St George by it’s Godfather Andrew Verikas in memory of his brother George who died during the first World War. Father Sophocles served a thriving community until 1960. 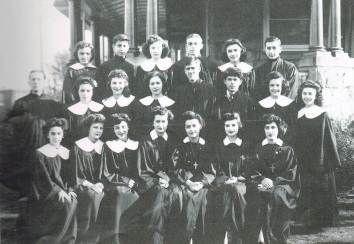 During the 1950’s and 60’s many St. George families relocated to nearby suburbs and it became apparent that the parish would have to move. Father Anthanse E. Devedjakis served as our  priest between 1960 until 1975. In 1966 , a Building Committee was appointed and in 1970 the committee purchased six acre site in rural Lima Middletown Township.

On October 19th, 1975 Father James Laliberte celebrated his first liturgy at St. George Church. On September 25th 1977 ground breaking ceremonies for the new church complex on East Forge road were celebrated. For two years we expereinced our “journey in the wilderness”  as our services were celebrated at various sites in Delaware County. On September 9th 1979 Metropolitan Silas officiated at the Thryanoixia (Opening of the Doors) and the first Liturgy.  The key to the Doors was presented to benefactor Lothar Budike who opened the door to the faithful.

Recognizing the need for classrooms meeting and storage areas the building committee began plans for expansion in 1991, and ground breaking services for the new educational building took place 1992 with Bishop Alexandros of Troas officiating. Construction however, was impeded by restrictions imposed by Middletown township and nearby neighbors. A lengthy legal process followed, and plans were finally approved in 1998 in which time the building permit was issued by Middletown Township.

After months of anxiety and frustration the township issued a Certificate of Occupancy in 1999 and another milestone was reached in the history of our parish.

Father Anastasios Bourantas began his service August 1st 2004. We’ve looked upon him with great pride for the continued progress that our community has made during his tenure.  Father Anastasios has brought fresh ideas, vital energy, a focus on youth and strong sence of spirituality for St. George Media.