The Chion Society – Agia Markella of Chester/Media, Pennsylvania was established in 1951 with the goal of assisting our St. George Church with financial, material goods as well as philanthropic deeds.  In addition, the society has provided assistance to a number of individuals of Chion/Greek descent throughout our community, in other communities throughout this great country as well as in Greece.

To date, a total of well over $70,000 has been donated to our St. George Church and individuals in need.  With a membership exceeding 40 hard working individuals, we are devoted, as always, in progressing our society’s goals established more than a half a century ago.

The Chion Society is a non-profit organization whose members are primarily of Greek – American ancestry.  It has supported our St. George Church since its creation.

Who is Agia Markella ? 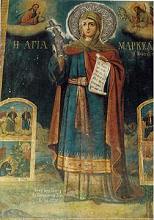 Agia (Saint) Markella was an inhabitant of Chios, Greece who was canonized by the Greek Orthodox Church. She is the patron saint of Chios. Agia Markella was born in Volissos, Chios, Greece. She was raised as a Christian by her mother. However, her father was a pagan.  Around the time of her eighteenth birthday, Markella’s father began to have desires for her. Afraid of her father, Saint Markella fled to nearby mountains and hid in a bush. Her father found her there and set the bush on fire. Afterwards, Markella tried to hide near the sea. Her father struck her with an arrow as she fled. Legend states that her blood stained the rocks red. As she was injured, she prayed to Jesus to hide her. A rock opened and she was able to hide all of her body inside, but not her head. Her father decapitated her and threw the head into the sea. The head floated back to nearby Komi.